Battleship is a game of two players which is played on grids on which each players fleet of ships are marked. Players take turns to take shots at the other player’s ships. The objective of the game is destroy the opponent’s fleet. Read more on Wikipedia. Building this game is also a very famous design interview question.

We are going to build the game in Kotlin using Redux architecture. We will implement the logic and not worry much about the UI since it’s secondary.

Before we begin writing some code, it’s imperative that we familiarize ourselves with the rules.

Let’s analyze what type of models and data structures we will require to build the game.

The point denotes a grid on the 2D-board. The point and grid representation is from index 0.

A ship may have a name, but it’s not that important right now. A ship has a size - how many grids long it is. We also need to put the ship on the board, so we need start point and end point of the ship to correctly determine where the ship is.

If we take board as a 2D space, a ship can be termed as a vector which has a magnitude and a direction (vertical or horizontal). We need a fix point to place the ship on the board.

Let’s write a class for Ship.

This definition is not complete yet and we shall revisit this later.

A board has a size and contains the fleet.

These models just represent the setup of the game. It doesn’t support any gameplay, eg. what happens when a player takes a shot?

The logic of the gameplay is complex and would involve some changes to our models.

When a player takes a shot at a grid, they mark it down on their board if they hit a ship or missed. It means that we need to store if each shot was hit or missed. To keep track of hits and misses, we will add hits: Set<Point> and misses: Set<Point> to the board.

When a player takes a shot, the defense also marks down on their board if the shot hit or missed. We will add opponentHits: Set<Point> and opponentMisses: Set<Point> to the board model to keep track.

It’s also helpful if we mark the hits to the ship so that we can easily track if the ship is completely destroyed or not. We will add hits: Set<Point> to the ship model.

We added hits and destroyed to the ship model.

We added id - unique identifier for the board and user. We also added hits, misses, opponentHits and opponentMisses to keep track of the moves and where the user can play. We added activeShips, destroyedShips and lost to have better representation of the gameplay.

Kotlin allows us to provide implementations for a predefined set of operators on our types. We can use +, * or in and other operators to make our code concise and readable.

The board has a predefined fixed size and if we want to add a ship on the board, it should fit the board.

Now, we can check if a point is on the board or not by just calling p in board which would return a boolean.

When a shot is taken, we need to check if it hit the ship or not.

We have not defined Ship.end yet. So let’s do that now with the help of operators. We will define WeighedDirection which is an actual representation of a vector.

And now we can check if a point exists on the ship by calling p in ship.

In the game, no two ships can overlap. So let’s overload another operator which would help us check if two ships overlap.

This is a complex logic and if you’re not in habit of solving such equations, I’d recommend that you try once. It took me some time to come up with the solution. We can use this operator to check if two ships overlap by simply calling ship1 in ship2.

Explanation: If both the ships have same direction, we need to check if start or end point one ship lies on the other or not.

horizontal.start.row in vertical.start.row...vertical.end.row - 2 operators are used here. in which we have overloaded in Point.contains() and .. which is the range operator.

We require Point, Direction, Ship, and Board models to build our battleship game. Here’s how the final version looks.

We have created our models and data classes. It’s time to work on the UI so that we can see the game in action.

Disclaimer: I’m not going to spend a lot of time in making amazing UI as it’s not the focus of the series. The UI is going to be super ugly!

We are going to use RecyclerView with GridLayoutManager to create the board. Each grid of the board will be a ViewHolder. We shall use a custom view to draw some paint and dots which would represent ships and shots on the board.

This is how it’s going to turn out. 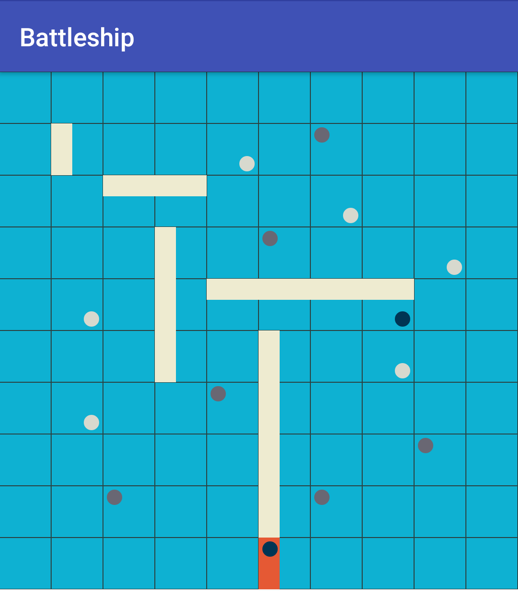 Let’s look at the components that are being used here.

Without going much in the details, here’s the code which will render the game UI. You can find the layout for ViewHolder here - square_cell_itemview.xml.

We have the components for the UI ready, but we still need to convert Board to List<Cell>. We create a list with capacity of width*height and iterate over each point and create Cell.

Let’s write an Activity and configure some code so that we can play with it. We’ll use a layout which has a RecyclerView. After creating the adapter, we would set up the boards. For this, we will randomly place the ships on each boats. We will add a click listener on the grid so that you can take a shot on the board.

I have quickly gone through the UI composing part as the article already has too much content. If you have any questions, feel free to leave a comment or get in touch with me.

We are ready with our models and data structure. In the next article, we will use Redux architecture to implement the gameplay logic.