Searching for free bathroom to bathe in cold water on a cold morning in Bangalore, well, that’s how the Design Innovation workshop started for all of us who were placed at RIE. Despite of the terrible accomodation, the workshop turned out to be a marvellous event in my lifetime and the credit goes to PESIT volunteers, MIT Media Lab people, other participants and most importantly my team mates Aditi and Nikita for bearing with me and supporting all the ridiculous ideas and putting all the effort to make a successful prototype( well, you can’t prototype something in 2 days, but yes! Let’s call it a prototype). So cheers to the team Freak’d Outs. That’s our team name. Deal with it. 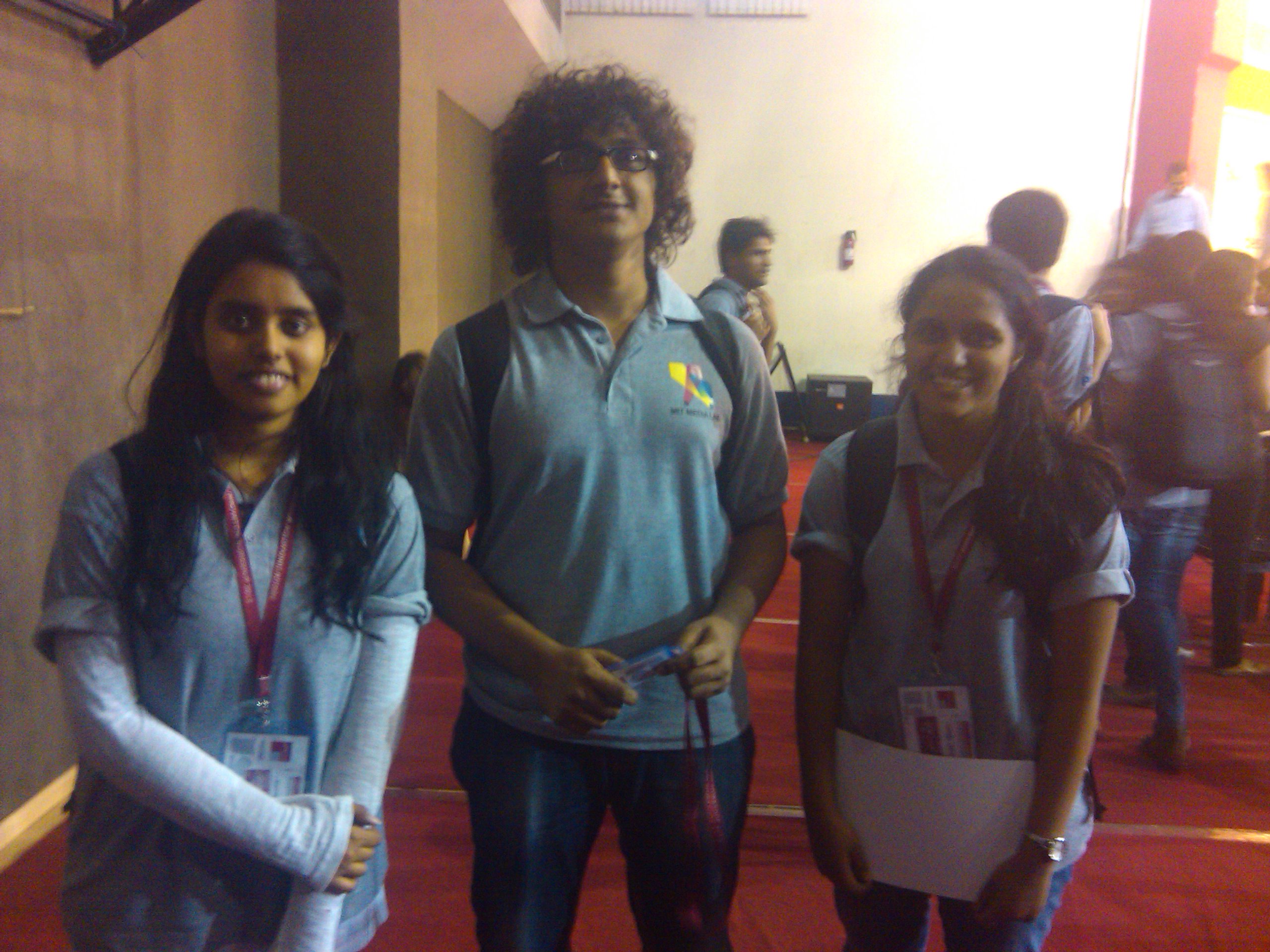 (From left) Aditi, Jay and Nikita at Design Innovation 2013

After brainstorming for couple of days, all of our ideas were turned down by Kshitij and Anette for being too ridiculous or too broad. Finally, we got an idea. It was simple. A pen which guides you how to draw shapes. It started slowly. It took us at least an hour to understand the idea. It was dinner time already and many teams had decided to stay back and work till midnight. We were exhausted and decided that we’d start fresh.

Day 3: Project Noname starts(We hadn’t yet decided the name of the project) We were supposed to make a small architecture of the project and put it on a chart and show it to others. But instead we used the chart to make lines and circles for the project. Kshitij and Anette were constantly asking us to make an archtiecture, but we were too busy installing OpenCV on Nikita’s laptop (I already had it. Aditi had older version). We finished detecting and tracking the marker(pen) by lunch. After lunch, we concentrated on algorithm part to detect a straight line with small error. We even talked to Anirrudh(He was mentor for Tangible UI track) and he suggested couple of different methods which we could use. They were kind of difficult to realize, but we thought we could do it. We started working on it when Kshitij came and told us another way to do it which incidently was our primary idea. We put a marker(piece of colored paper) on top of the pen and track the center point of the marker using OpenCV and a simple camera. We finished it by dinner. It was working perfectly. Now, it was time to interface the hardware.

We got an Arduino Uno board, a vibrator (small motor) and bunch of wires. Fortunately Aditi had worked with Arduino before otherwise it’d have taken much more time. After writing the code and burning it on the microprocessor, she started to interface OpenCV code with the hardware using libserial. It worked couple of times but then suddenly stopped. We checked the connections and everything seemed fine. We asked the so called Arduino expert, Priyans, about this and he asked us to solder it first. Soldering solved the problem. We stayed till midnight and finished the basic prototype and now we wanted to move on to different shapes.

Day 4:Project finally gets a name We started working on shapes. What’s the most basic shape that anyone can think of? Circle. We started working on it. We finally came up with a name for the project. Freehand:A haptic pen for blind and autistic children. We also made a lame poster from some poster making website since none of us had working photoshop or anything similar. It was dinner time and we still had some problems with the circle so I started with different shapes eg. Triangle, L, Z, etc. Kshitij and Anette had been giving us some feedbacks and constantly encouraging us to push it further. Well, it worked. After midnight we had a breakthrough (A small one, though). We figured out a silly error in the code and voila! It started working. We had a sigh of relief. Kshitij told us to stop working and prepare for the “Big” speech for tomorrow. We had to prepare a one minute speech for the open showcase where we’d demonstrate our projects to the big shots of the indesutry.

Day 5:Judgement Day After attending INK Talks, we started setting up the project for the open showcase. I exactly knew what was going to happen. We were getting terrible illumination and since it was based on an uncalibrated simple webcam and not a kinect, we’d face huge problems. We somehow managed to overcome it with some sort of jugaad. It was working and that too with much better efficiency. So that was an exhilarating experience that I’d never forget.

Freehand: So what was our project about?

It’s a pen for blind people and autistic children to learn to write and draw shapes. Basically, it’s an assistance system which would assist blin people in writing. Whenever they are drawing some shape, writing a character or a straight line, if they go out of bounds, the pen starts to vibrate, giving a haptic feedback to the user so that the user can start again or come back to the shape. By this pen, we can eliminate the need of a human for the blinds to learn to write. This can be further extended for art and sculptures. Children can learn to draw famous cartoons. It can be used to make a perfect duplicate of the existing sculpture. This is a low cost system which requires an ordinary webcam, Arduino board, OpenCV, C++, Linux (All open source software). Even the project is an open source project. Here’s the GitHub link. Freehand. Fork it.

I don’t have all the posters and stuff. We didn’t even take many pictures and I still regret not taking a small video of the project. 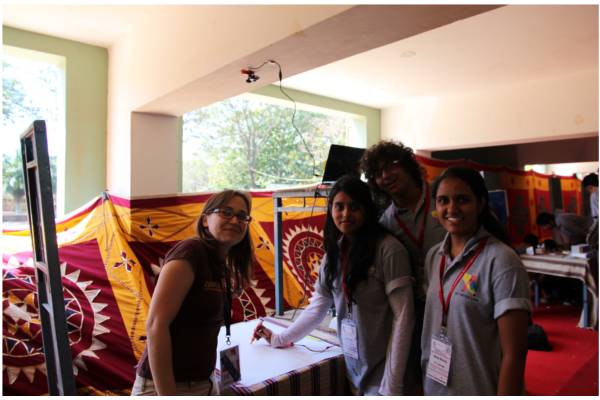 A random screenshot of our project.

It was an amazing week. I met a lot of people and made some friends. I learned a lot from all the gurus from MIT Media Lab. Design Innovation changed my whole perpesctive towards technology and product development. I realised that design of the product is as important as the technology and innovation behind it. It is essential that the product directly connects with the people. And the developer should be able to sell the product. If you have some kick ass product but you have a bad marketing strategy, it won’t sell. You need your one minute speech to hypnotize the person into buying the product.

One more thing that I learned is how to come up with an idea. My whole approach was wrong. I had technology in my mind and was looking for problems which could be solved using that technology. Instead of that, I should be looking into the problem and think of some technology or come up with a new one to approach and solve it, I hope I can sustain this thought for few more years and come up with something worthwhile.

P.S. I apologize for the late post. I was busy configuring Ubuntu on my new laptop. Had a short trip to home. And a big thanks to PESIT and its volunteers for making it so brilliant.